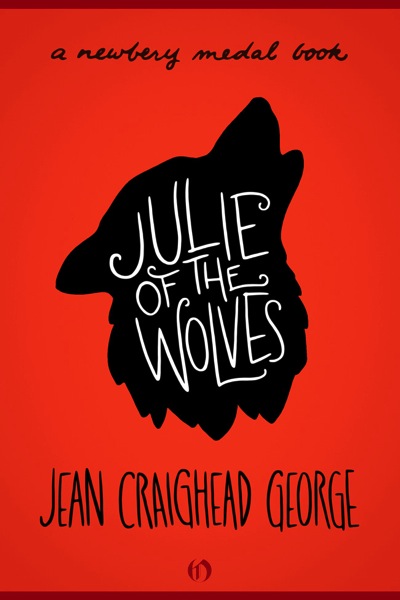 This is Open Road’s cover of Jean Craighead George’s classic Julie of the Wolves, first published by Harper & Row (now HarperCollins) in 1972 and reprinted many times since then. It won the Newbery Medal and also the Deutscher Jugendliteraturpreis—which was won in 2004 by our own Lian Hearn, to give you some indication. The e-book was published in August 2011; it’s a handsome electronic edition with a bonus author biography and many old and recent photos of George, who died in May 2012 at the fine age of 92. George had licensed the electronic rights to Open Road after they offered her double the HarperCollins e-book royalty, and she participated fully in the e-book’s production.

Unfortunately HarperCollins felt that the contract they signed with George in 1971 gave them the exclusive right to publish the book in electronic format, and on 23 December 2011 they filed against Open Road in the United States District Court for the Southern District of New York. The very knowledgeable Passive Guy has written extensively on the merits of HarperCollins’s position, arguing that back in 1971 e-books as we now know them not only hadn’t been imagined, but pretty much couldn’t be imagined: computers had only recently shrunk to the size of refrigerators and hardly any of them even had screens; the Internet didn’t exist and neither did any reasonable way for an ordinary civilian to transfer computer data.

Nevertheless, yesterday Judge Naomi Reice Buchwald found for HarperCollins, deciding that the terms of the 1971 contract were wide enough to grant them exclusive e-book rights.

To reach this decision, Judge Buchwald had to distinguish the current case from the 2001 case of Random House v Rosetta Inc. In the Rosetta case, each of the relevant contracts (with William Styron in 1961, Kurt Vonnegut in 1967 and Robert Parker in 1982) had granted Random House the right to “print, publish and sell the work in book form”. The court held that, on the ordinary interpretation and common usage of the language, that right was limited to physical books and did not extend to electronic books.

In the present case, Judge Buchwald noted that although the corresponding clause still referred to publication “in book form”, it left out the word “print”, which had “a limiting effect and a strong connotation of paper copy”. This omission was enough to distinguish Rosetta. That seems a bit tough to me, as the Rosetta case didn’t rely at all on the word “print” and decided that the phrase “in book form” was limiting enough. I would think that, in that context, you’d need to do more than remove the word “print” if you wanted to expand a right to encompass a format that wouldn’t even be plausible for another 30 years.

Judge Buchwald further examined a pair of extra clauses that (1) provided that HarperCollins had the exclusive right to sell or license “subsidiary rights in which [it] has an interest”, but (2) needed George’s written permission to deal with those rights, particularly in relation to:

use thereof in storage and retrieval and information systems, and/or whether through computer, computer-stored, mechanical or other electronic means now known or hereafter invented and ephemeral screen flashing or reproduction thereof, whether by print-out, phot reproduction or photo copy, including punch cards, microfilm, magnetic tapes or like processes attaining similar results…

Judge Buchwald considered that this last clause was sufficient to grant HarperCollins what we now recognise as modern e-book rights.

There are two issues here—three if you consider that the clause is basically gibberish (what does “and/or whether” mean? What is “phot”?). The first is what exactly “storage and retrieval and information systems” might include—these things have been in book contracts since the 1960s and I’ve never known what they are. I assumed something to do with catalogues—you might allow part or even all of the book to be indexed so that it turns up in searches and helps you find a print version. Even if I’m way off, it’s difficult to find a recognisable e-book in this barely-conjuncted collection of archaic technological terms.

An equally important issue is that the clauses taken together don’t grant any rights at all—they deal with the disposition of any subsidiary rights that HarperCollins has been granted elsewhere in the contract. But the rest of the contract is silent on these rights. HarperCollins says the grant is implied by this mangled clause, but that seems a dangerous inference. Publishing contracts are full of labyrinthine subclauses that only apply if certain conditions obtain—if certain boxes are ticked or words aren’t crossed out. These clauses shouldn’t be used to infer the very things they depend on.

So I think it’s a surprising decision and I hope that Open Road will appeal it. Naturally it will only be relevant to contracts that are very similar to this one, but publishing contracts echo each other’s language often enough that there may be a quite a large number affected. I’ll be checking extra carefully for “print, publish and sell” and “now known or hereafter invented” until this is all sorted out.

In the meantime you can still buy the Open Road edition of Julie of the Wolves here.