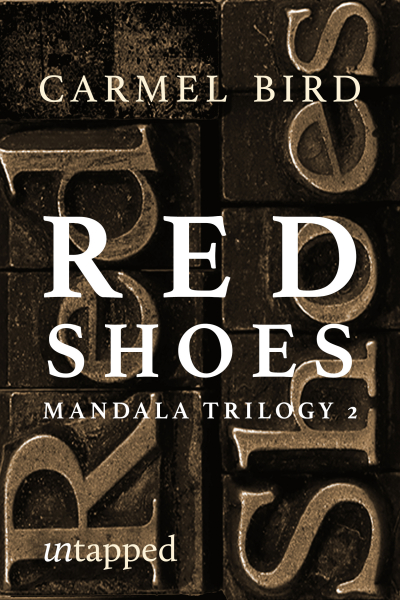 Petra Penfold-Knight is the leader of a religious cult. Many join because of the persuasive charm of privileged Petra. But not all. Some ‘members’ are babies stolen from their unmarried mothers.

Red Shoes—so-called because the wearing of them is a mark of membership —could have been a straightforward thriller or suspense novel. It’s not. Carmel Bird has Petra’s guardian angel tell the story. And angels, of course, always have their own opinions and a rather particular point of view.

First published in 1998, and inspired by the story of the Australian religious cult known as the ‘The Family’, Red Shoes is the second book in award-winning author Carmel Bird’s compelling Mandala trilogy, a series of novels which examines the dark danger of charismatic leaders. It was shortlisted for the Miles Franklin in 1999.

Novelist, essayist and non-fiction writer Carmel Bird won the Patrick White Award in 2016. Her works include The Bluebird Café (1990) and the thematically-linked Mandala trilogy The White Garden (1995), Red Shoes (1998) and Cape Grimm (2004). Her most recent novel is the acclaimed Field of Poppies (2019) of which Robert Drewe wrote: ‘How to describe Field of Poppies? A lush feast of wit and wisdom? Writing so rich you simply want to devour it? A forensic examination of an Australian country town? Literary tour de force will have to do.’