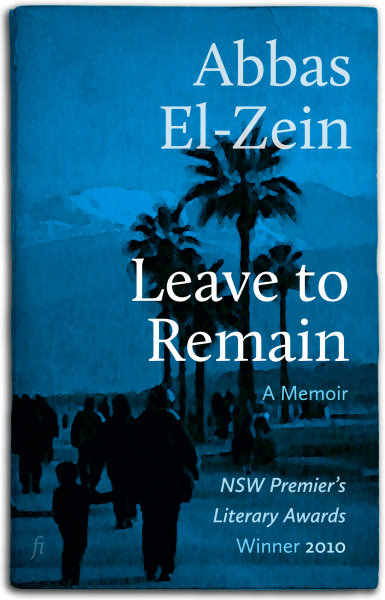 Leave to Remain is Abbas El-Zein's award-winning memoir of his youth in Lebanon and his years of travel between the Arab and Western worlds. It is powerful and poetic, passionate and elegiac, a clear-eyed and heartfelt examination of the forces that have shaped both his own life and a great deal of ancient and recent history.

In Leave to Remain, El-Zein tells his story of growing up in civil-war Beirut, a city in the throes of self-destruction, yet obstinately clinging to its cosmopolitan past. El-Zein traces the genesis of a contemporary Middle Eastern identity – his own – under the influence of culture, religion, history and places far removed from where he grew up: Najaf and Baghdad, Paris, Palestine, London, Sydney and the American Far West. With him we travel through a Middle-Eastern life with an eye on the mundane and the everyday, as well as the cataclysmic events overshadowing them – from the adventures of an ancestor fleeing Ottoman armies during the Napoleonic wars to the trans-national world of Islamic scholarship in which his grandfathers lived, from the Israeli invasions of Lebanon to the Iraq war and the post-September 11 world of today. Leave to Remain is a story of a troubled homeland, of many departures and less-than-happy returns – an autobiographical reflection on today’s Arab world and its relationship with the West.

Leave to Remain won a NSW Premier’s Literary Award in 2010.

‘The best memoirs illuminate our intellectual blind spots. They leave us wiser and often less certain of our inalienable truths. So it is with Leave to Remain.’ – Laurie Steed, Readings

‘An important book… written in many tones – lyrical, sardonic, angry, heartbroken – but they are all in the key of Abbas El-Zein’s compassionate love for war-ravaged Beirut, the city of his birth, childhood and early manhood.’ – Raymond Gaita, Philosopher and author of Romulus, My Father

‘El-Zein lyrically traverses cities [and] landscapes… with poignant accounts of the effects of war and displacement… Exquisitely realised in its narrative playfulness, this memoir captures the complexities of identity and politics, history and religion across time and space.’ – Judges of the NSW Premier’s Literary Awards