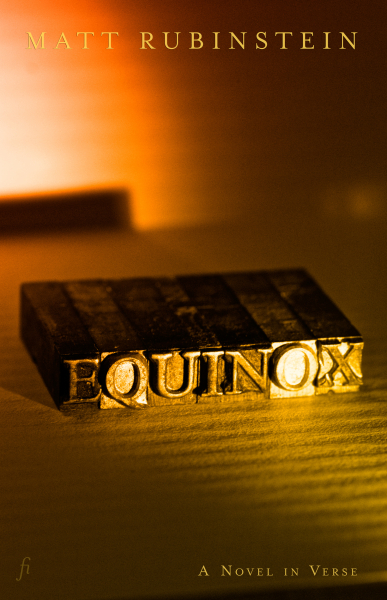 A novel of Sydney, its salt water and sandstone, its glass and steel. A sonnet for each day of the year, following four characters through four seasons as their fortunes rise and fall and their paths cross. The sequel to the award-winning Solstice.

Equinox tells a story of Sydney over four seasons. The days lengthen and fortune shines, until the earth swings from the sun and into a long winter. The city-dwellers all draw the same curve with their lives: the bright spark whose job is killing him in any number of ways; the deckhand trying to shunt her father through his life; the beauty queen who finds the city a jealous rival; even the homeless man wandering like a frightened angel. They struggle through different parts of the city—though their paths may meet, and they may help each other back to the spring.

Each day in the city’s year is told in a sonnet, capturing some of the patterns and rhythms of the story. Each sonnet is an impression, strung together into the moving image of a city and its many parts, its rivers and gardens, its towers and suburbs, its pubs and empty streets, and the people who cling to it as if to a ship in high seas.

Equinox is the sequel to Solstice, which was shortlisted for the Australian/Vogel literary award and performed at the Adelaide Festival with music by Kate Ceberano and Barney McAll. Equinox was first serialised on the Sydney Morning Herald's website and is currently being tweeted in its entirety over the course of the year.