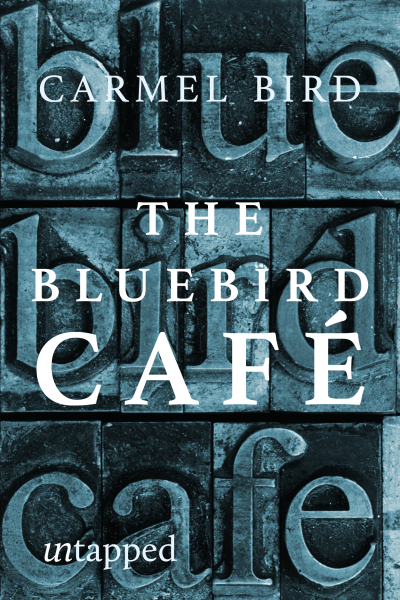 In Tasmania, successful entrepreneur Nancy Best has recreated the defunct mining town of Copperfield as a glass-domed amusement park whose centrepiece is the Bluebird Cafe. The facsimile also includes a wax museum containing a statue of Lovelygod, the midget daughter born to the twins Bedrock and Carrillo Mean, who caused a sensation when she vanished without a trace 20 years before. Bedrock faithfully keeps vigil for her daughter’s return, while Carrillo roams the world in search of her. Also haunted by the mystery is expatriate author Virginia O’Day, who returns to Tasmania from America to write a play, Waiting for Lovelygod …’ Publishers Weekly US, in the publication review of the American edition. Unlike the Australian edition, it has never been out of print.

Described by Kirkus Reviews, US, as ‘a sweet-natured looking-glass version of Twin Peaks’, The Bluebird Café is award-winning author Carmel Bird’s debut novel and announced the arrival of a highly original, talented writer. First published in 1990, The Bluebird Cafe was shortlisted for the Miles Franklin Literary Award the following year.

Novelist, essayist and non-fiction writer Carmel Bird was the recipient of the Patrick White Award in 2016. Her works include The Bluebird Café (1990) and the thematically-linked Mandala trilogy The White Garden (1995), Red Shoes (1998) and Cape Grimm (2004). Her most recent novel is the acclaimed Field of Poppies (2019) of which Robert Drewe wrote: ‘How to describe Field of Poppies? A lush feast of wit and wisdom? Writing so rich you simply want to devour it? A forensic examination of an Australian country town? Literary tour de force will have to do.’