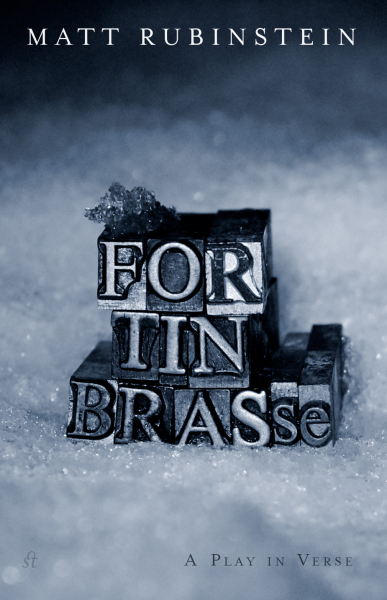 Fortinbrasse is the tragedy of Hamlet’s mirror and foil, the Prince of Norway. It supplements the handful of references Shakespeare gives us in Hamlet with further details from his, sources together with my own speculation about the circumstances that eventually lead to Fortinbrasse’s bittersweet arrival at Elsinore at the end of Hamlet.

The action is roughly contemporaneous with Hamlet’s, beginning a short time before news of King Hamlet’s death reaches Norway and ultimately merging into Hamlet’s final scene. It explores the psychological, personal and political factors that drive and complicate Fortinbrasse’s desire to redress his father’s death at King Hamlet’s hands and the consequent loss of his country.

Many of the elements in Hamlet are mirrored or inverted in Fortinbrasse, reflecting the rich relationship between the two princes that Shakespeare hints at. Shakespeare’s blank verse is translated into fornyrðislag, the alliterative metre used in the old Norse eddas, and Hamlet’s references to the Greek and Roman pantheon are reflected in Fortinbrasse’s use of Norse mythology to create a Scandinavian sense of place and culture. Many of the characters and relationships in Hamlet also have their counterparts in Fortinbrasse.

If Hamlet is a tragedy of vacillation and overthinking, Fortinbrasse is one of single-mindedness and unreflecting action. Although Fortinbrasse finds himself on the throne at the end of both plays, he is cheated of his revenge, and in the course of his pursuit through Norway and Poland has lost almost everything. Shakespeare has him saying, “For Me, with Sorrow I embrace my Fortune,” and much of Fortinbrasse is devoted to telling the story of his fortune and his sorrow.

Fortinbrasse was written as a play for at least six actors and can easily accommodate larger casts. It would be ideal for a school or community group studying or performing Hamlet, as well as an ensemble theatre. It would also work well as a play for voices, or can be simply read.